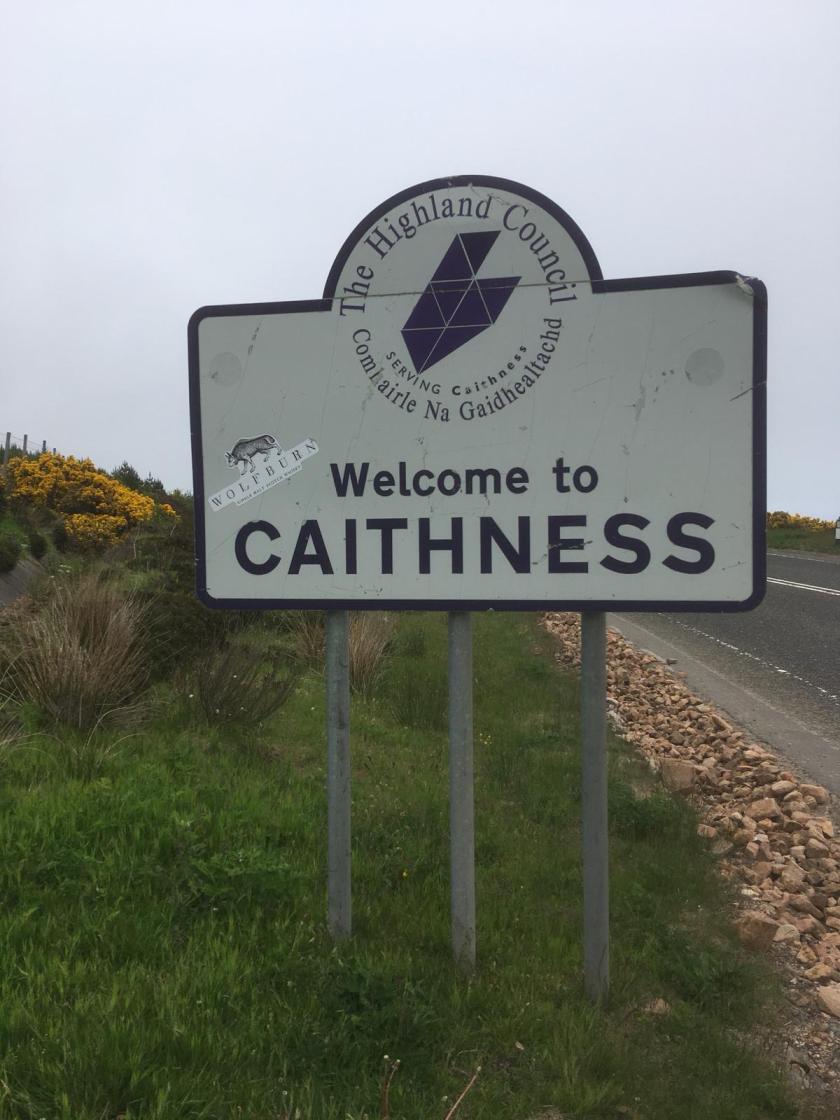 Helmsdale was a perplexing place. It’s a lovely little village with everything the walker/cyclist/tourist could ask for but it wasn’t busy. It has a harbour, a really good pub, a couple of hotels, a convenience store, a chip shop, restaurants, a railway station, a post office, The Emigrants Statue… and those are just the features and facilities that I noticed! But, it didn’t feel as busy as it deserved to be. We stayed in a brilliant, very reasonably-priced hotel/guest house, too. Maybe it was simply a quiet Friday night in June? If Helmsdale was on the west coast rather than the east then you wouldn’t be able to move for tourists. I would definitely like to visit it again, for longer next time.

Pete is suffering with a painful big toe – he blames his new boots – so he chose not to walk at all today. I set out just after 9am for my road walk to Dunbeath. The sky was thick with cloud, the tops of the hills were covered in mist and it was still warm. I had a long, slow climb, taking 3.5 miles to reach 750ft from virtually sea-level. The going was easy, almost effortless yet my shirt was soaking with sweat in no time.

Thankfully, the A9 was a lot quieter today. There were fewer lorries and vans on the road – I assume because it was the weekend – and there were plenty of gaps between vehicles. On the way I looked back to some nice views of Helmsdale as the road gained height. Once my highest point was reached the road mainly followed the contours of the hills to work its way along the coast. I negotiated an impressive hairpin bend at Ord of Caithness. Later, I passed a monument to William Welch, a popular tramp who perished in a snow storm in 1878.

Before too long my stay in Sutherland came to an end when I entered my final County of the walk, Caithness. What a journey it has been: from Avon to Ayrshire, from Somerset to Sutherland, from Cornwall to Caithness, and many more in between.

At Creagan Mor I saw a sign for the abandoned village of Badbea. It was settled by families who had been evicted in The Clearances, but provided a meagre living for the inhabitants. The village was slightly off route for me so I passed up the opportunity to pay a visit, although I dearly would have liked to. The ruined reminder of ‘ man’s inhumanity to man ’ would have dampened my spirit, in any case. 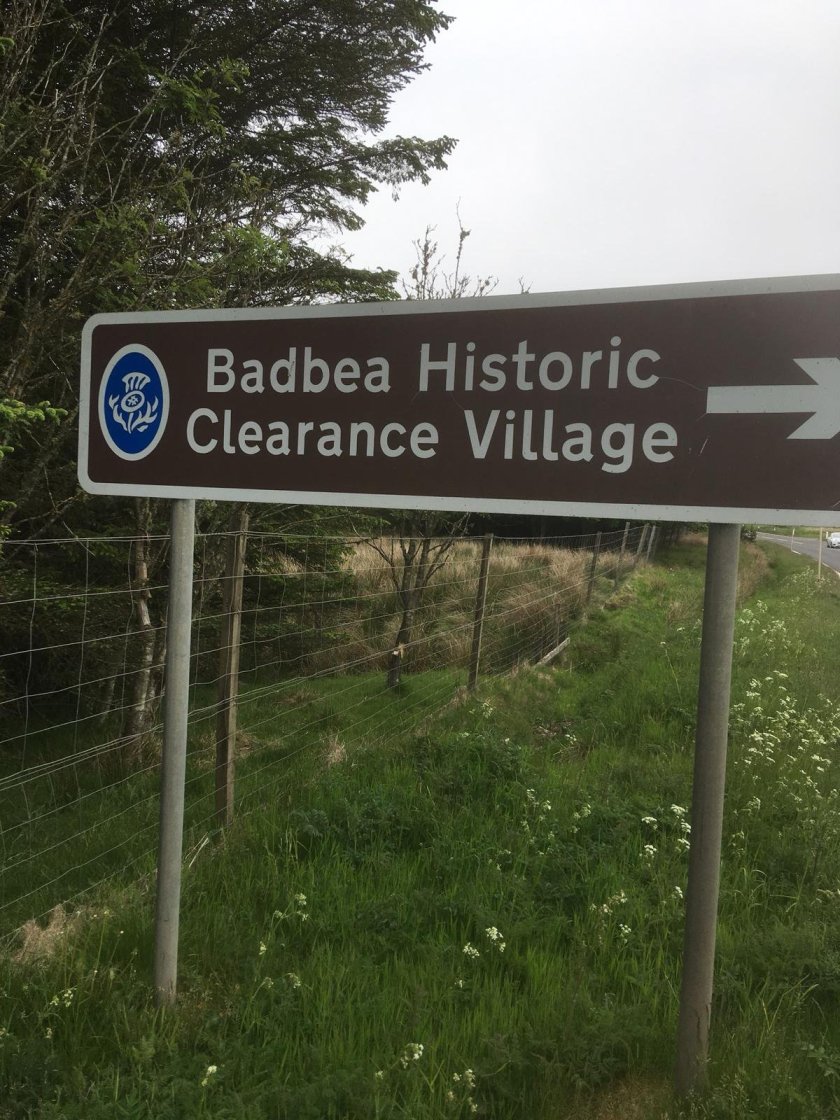 Straight after Badbea I chanced upon a monument in a field to The Grey Hen’s Well. How it got its name and why it was worthy of a memorial plaque in 1934 is beyond me! The road then descended rapidly as I arrived at the village of Berriedale. The latest in a long line of ostentatious war memorials greeted me at the turn. It was a beautiful structure, but, then again, every one I’ve seen in Sutherland and Caithness has been outstanding – Helmsdale’s is a clock tower. As I looked at the names, it struck me that privilege still prevailed a hundred years ago because the gentry were given pride of place at the top of the list. Is it any different today? Boy, I was really in a jovial mood after that. I consoled myself by singing a couple of Eric Bogle’s anti-war songs out loud, verse by verse, as I walked up the hill to continue on my way. The drivers and passengers in passing cars must have thought I was nuts… and who am I to argue?

A very loud ‘ Good morning ’ startled me, because there was no traffic on the road. I turned round to see a leisure cyclist glide by me on the other side of the road with a cheerful grin on his face. Ten minutes later a passing blue van peeped his horn, waving animatedly at me as he went by. I apologise if it was somebody I should have recognised, but the van meant nothing to me.

After Beinn nan Coireag the countryside started to flatten out, giving me distant views in all directions. I was keeping up a good pace, which cheered me up somewhat, as I have a long road walk tomorrow.

Again, the road descended as I approached my destination, the coastal village of Dunbeath. I arrived there at 2.15pm, which was a little early for my B&B, so I stopped for a pint of real ale at the Bay Owl. A short time later, Pete joined me, having taken the bus from Helmsdale. 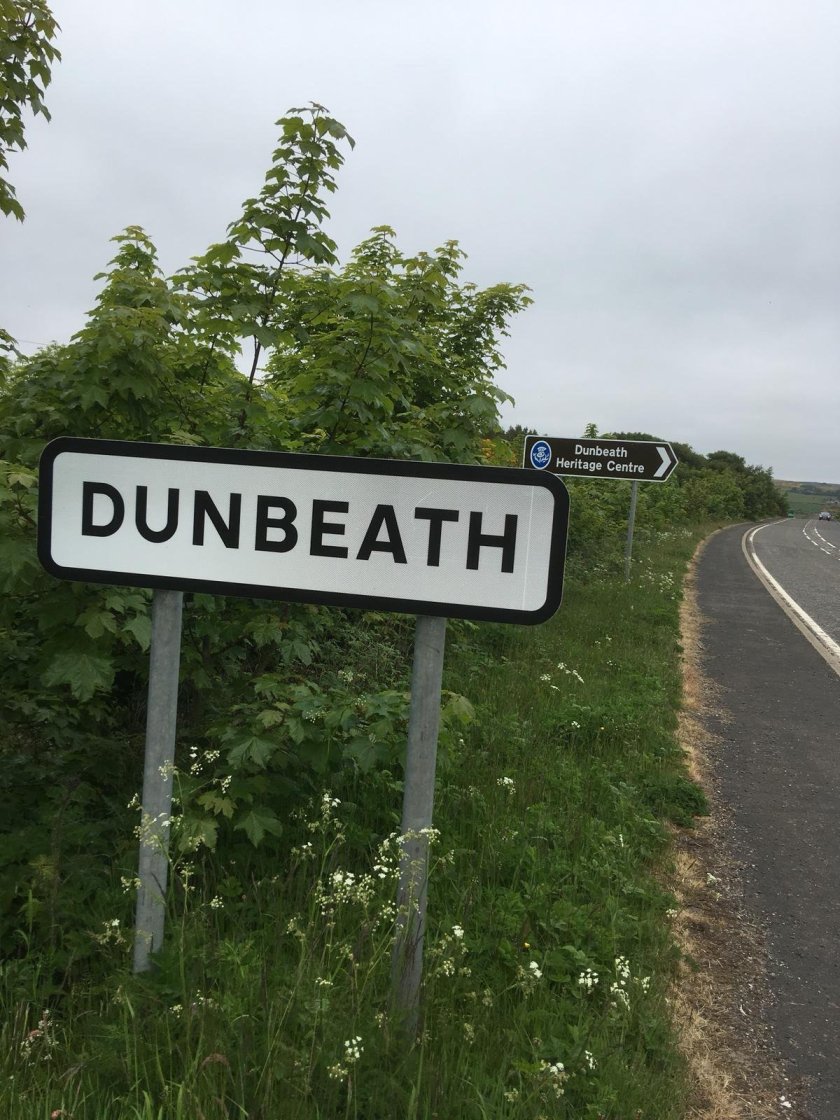 Despite what I’ve written here I was in good spirits all day. My walk along the A9, far from being a ghastly experience, was a very enjoyable and satisfying day’s entertainment. The sun didn’t appear in the afternoon, as forecast, and… yes, it stayed dry all day.