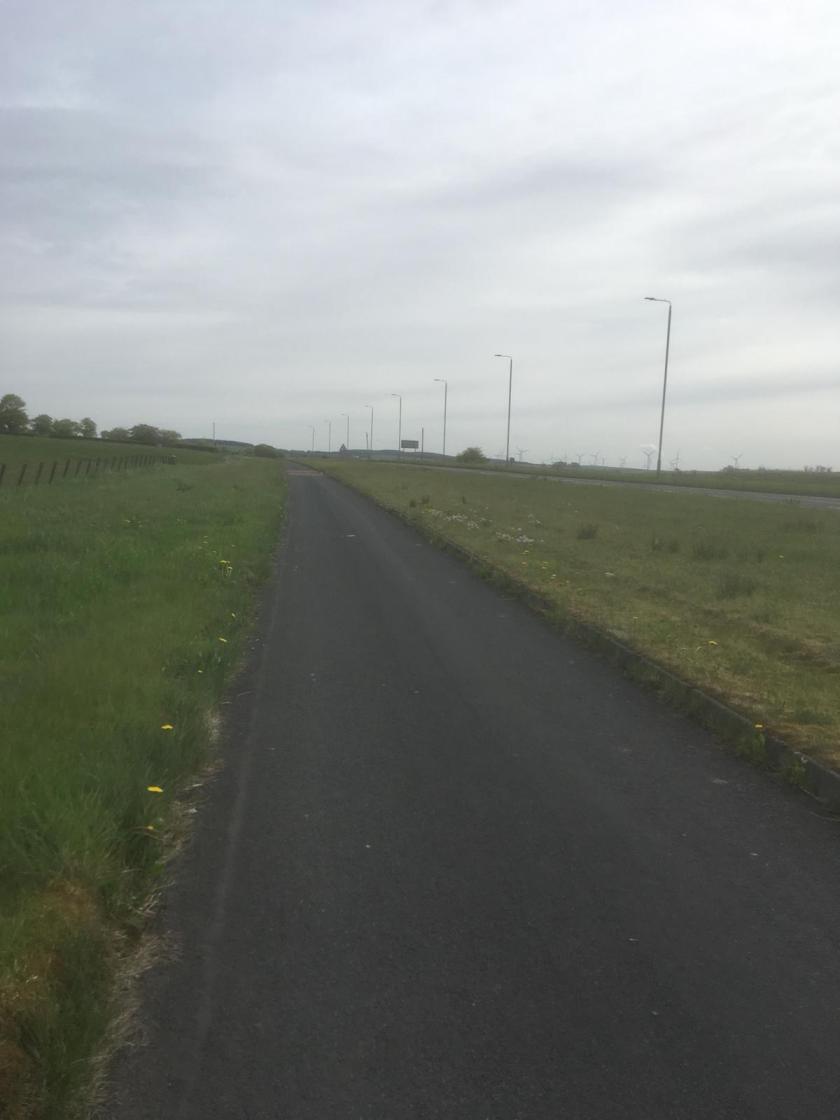 Today was supposed to be the first of 2 rest days, which I had sort of planned because it is Elizabeth’s birthday. However, as she was working, and therefore not at home, I decided to move Sunday’s planned walk, to Glasgow, forward to today (Friday) and take the weekend off.

That leaves me with a short day on Monday, to Milngavie, before going on the road again to tackle the West Highland Way, which is the first stage of the final 3 weeks.

For only the third time since Carlisle I walked on my own today. I find that I have a more sensible discipline when accompanied, because it forces me to take regular breaks. On my own, I rarely stop for a rest or a drink of water, preferring a slightly earlier finish to a balanced routine. This is what I did today: started just before 10am, finished at 3pm, therefore walked 16.8 miles in 5 hours, which is 3.3 miles an hour. Having only a light day pack certainly helps but I don’t need to walk at that pace, it’s not a race. Anyhow, I’ve got company from now until Fort William so that should force me to walk less aggressively.

When the M77 motorway was constructed, linking Kilmarnock with Glasgow, the existing A77 was retained but altered to incorporate a dedicated cycle path/walkway. This was my planned route. There was something surreal about walking the length of a main road only separated from the traffic by a small kerb. I felt safe but vulnerable at the same time, if that makes sense? What makes LEJOG completely different from every other walk that I have done is the amount of on-road walking which has to be tackled on an almost daily basis. On recognised Way Walks it is accepted that road walking is kept to a minimum. Even adding another month or so to my adventure, by incorporating more recognised walks, would still have meant me spending many days sharing my walk with vehicles. You have to be alert every second that you spend walking on an open road – it’s not for the faint hearted. 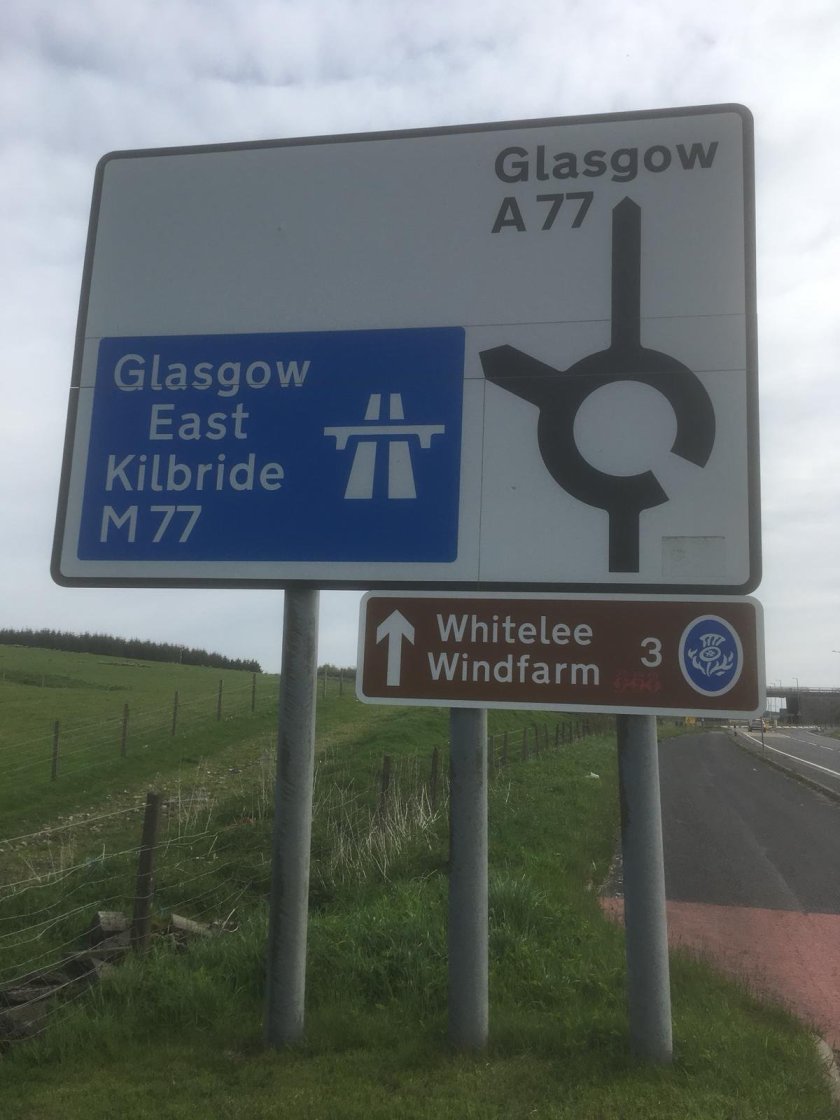 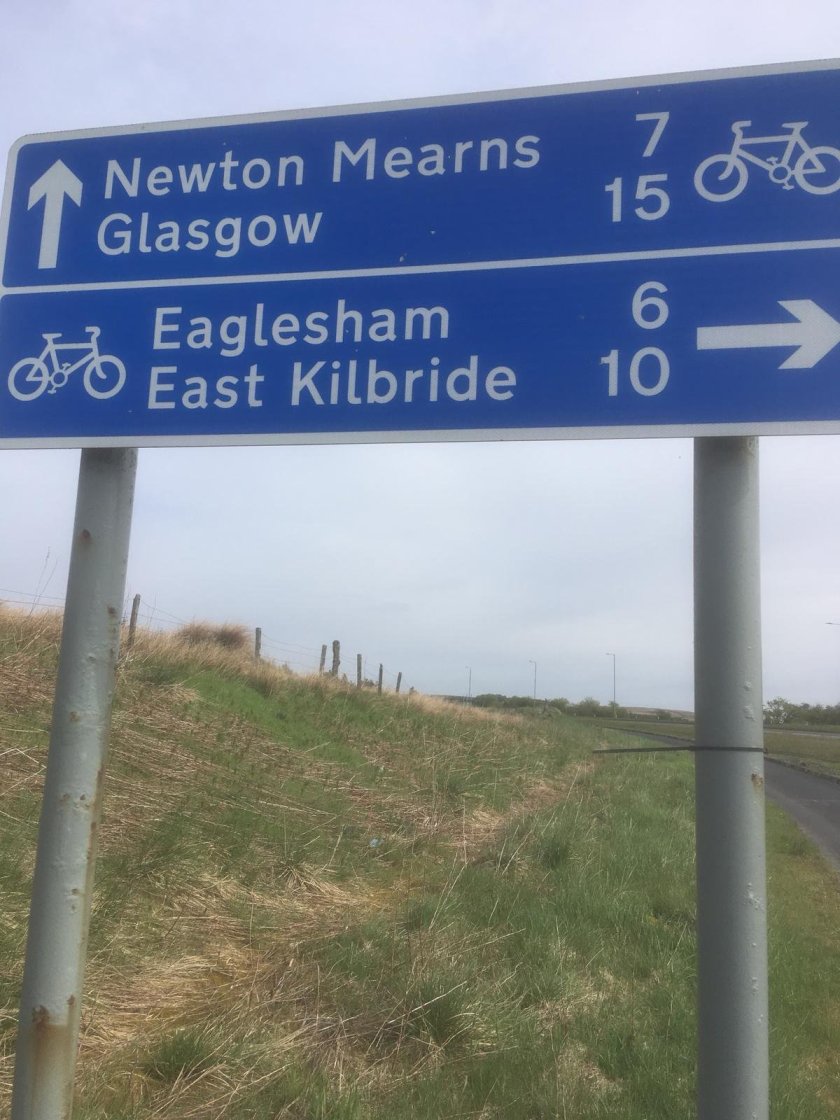 Throughout my walk today, another warm dry one, over the Fenwick Moors, my constant companion was the M77 motorway. It’s a busy road, channelling heavy traffic to and from the Ayrshire coast and, further on, Stranraer with its ferry links to Northern Ireland. The standout feature in the early part of my walk was Whitelee Windfarm on the Eaglesham Moor. It’s the UK’s largest onshore wind farm with 215 turbines. I’ve been able to see it for days.

After crossing from East Ayrshire into East Renfrewshire I reached the outskirts of the city at Newton Mearns. From there on it was built-up area all the way. When I stayed in Glasgow I would travel this route every day by car but I had never walked it. Because it is mainly housing little has changed over the years.

For me, the long walk into the city centre was fascinating, as I recognised landmarks on both sides of the road with every step. I walked through Whitecraigs, Giffnock and Shawlands before reaching Queens Park and passing my old flat in Pollokshaws Road. It’s from there in 1978 that I drove my good friend, Robin, avid reader of this blog and Toronto resident, to Prestwick Airport when he emigrated to Canada. Pete, who will be walking the West Highland Way with me next week, his second long section of LEJOG, spent 4 years living there too.

The last mile of the walk, over the Jamaica Street Bridge then through Glasgow city centre to Buchanan Street Bus Station did not require map, compass or GPS; to be honest, none of Day 49 required any navigational aid. In many ways it was more a trip down memory lane than a trek through the UK but it was still a serious day’s walk and I was pretty tired at the end of it.

I now have 2 days ahead without walking. There is still a lot to do in preparation for my final 3 weeks walking so I won’t have too much leisure time. As I write, everything is still on schedule for my finish at John o’Groats on Monday, June 11th. I have enjoyed a lot of good fortune so far, fingers crossed for the final stretch.